If eyes are the windows to the soul, then it’s no wonder we worry when we notice cloudy eyes in dogs. after all, we don’t want our dogs to lose their vision or feel uncomfortable.

When you see dogs with cloudy eyes, it may be a natural part of the aging process. But cloudy eyes in dogs can also be a symptom of a number of eye problems. trying to distinguish between what is normal and what is a problem can be tricky. While your veterinarian is your best source for information on your dog’s eye health, it’s helpful to know what types of problems can cause a cloudy appearance in your dog’s eyes and any other symptoms you may be looking for.

Reading: Why is my dogs eye cloudy

The most common causes of cloudy eyes in older dogs are nuclear sclerosis and cataracts. however, there are other conditions that can also create a cloudy appearance in your dog’s eyes that require immediate veterinary attention.

As dogs age, some cloudiness is normal. “Most dogs, as they age, develop a cataract-like clouding within the lens called nuclear sclerosis,” says veterinary ophthalmologist Martin Coster, DVM, MS, Diplomate of the American College of Veterinary Ophthalmologists (DACVO). “Unlike cataracts,” Coster says, “this condition rarely causes vision problems. however, focusing ability may be affected.”

It is easy to confuse cataracts and nuclear sclerosis. Both conditions make the lens look cloudy, but there are some differences. Nuclear sclerosis usually gives your dog’s eyes a cloudy, bluish discoloration, unlike cataracts, which are white and opaque.

More importantly, nuclear sclerosis (also called lenticular sclerosis) does not significantly decrease your dog’s vision as cataracts do. it tends to affect both eyes at the same time. the two conditions look different when your veterinarian examines your dog’s eyes with an ophthalmoscope.

Nuclear sclerosis is a change in the lens of the eye that normally occurs with aging. No treatment is needed because the condition doesn’t cause serious problems, but it might be a good idea to discuss your dog’s aging eyes with your vet, so you know what to expect as your dog ages.

“It is common for dogs that have nuclear sclerosis to also develop cataracts,” says Dr. Jerry Klein, AKC Veterinary Director. “If your dog develops nuclear sclerosis, your vet will want to do regular checks for cataracts.”

Dogs develop cataracts just like people. These milky white changes in your dog’s lens are the result of abnormal lens metabolism. The lens in dog and human eyes acts like a camera lens, focusing light onto the film at the back of the eye, called the retina, where the brain then processes the information to form a picture of the world that surrounds it.

The lens is composed of water and protein. these materials are organized in a very specific way, and when the proteins start to clump together, either as a result of age or trauma, cataracts can form. these protein strands gradually obscure the lens, making it difficult for your dog to see and, in some cases, causing total blindness.

There are a variety of causes of cataracts in dogs, including age, trauma, metabolic diseases such as diabetes, and genetics.

Some dog breeds are more susceptible to hereditary cataracts than others. These cataracts can occur when dogs are puppies or as they age, depending on the type of cataract inherited, and usually occur in both eyes. Some of the most commonly affected breeds include Australian Shepherd, Bichon Frize, Boston Terrier, French Bulldog, American Staffordshire Terrier, Havanese, Silky Terrier, Miniature Schnauzer, Poodle, Cocker Spaniel, Labrador Retriever , the Siberian Husky, and the West Highland White Terrier.

Read more: Tampons for Dogs – Is it Safe? Should I get it For Her?

Cataracts can obscure your dog’s vision. sometimes they pose no additional problem beyond the vision loss itself, but other times they can lead to an even more serious problem: glaucoma. “Rapid diagnosis is important. there is a surgical solution for cataracts, but it is better to do it as early as possible in its formation”, says dr. klein.

Glaucoma in dogs occurs when pressure inside the eye increases, causing damage to the structures of the eye. This painful condition, and very high intraocular (inside the eye) pressure is considered a veterinary emergency, as it can cause permanent optic nerve damage and vision loss.

There are two types of glaucoma: primary or hereditary glaucoma and secondary glaucoma, which is usually caused by another condition such as cataracts, lens dislocation or subluxation (where the lens changes position in the eye), cancer, inflammation, or detachment retinal. hereditary glaucoma affects many dog ​​breeds, including beagles, cocker spaniels, and english cocker spaniels, chow chows, basset hounds, russell terriers, chinese shar-pei, and arctic circle breeds such as the siberian husky and norwegian elkhound.

A cloudy eye is not the only symptom of glaucoma. You may also notice that the white of the eye is red and irritated, or that there is a lump in the eye, a blue or red tint to the cloudiness, increased discharge, squinting, a dilated pupil, and most alarmingly, Sight loss . dogs are good at compensating for vision loss in one eye by relying on the other eye, so it’s often hard to spot.

Glaucoma is usually diagnosed with a tool called a tonometer. “It’s important for your veterinarian or veterinary ophthalmologist to determine if a dog is suffering from primary or secondary glaucoma, because treatment can vary for each type,” says Dr. Klein “proper and prompt examination is also important because a dog with glaucoma in one eye is at high risk of having glaucoma in the other eye.”

In cases where medication fails, your veterinarian may recommend laser therapy, eye removal, implants to facilitate drainage, injections of gentamicin (an antibiotic), and cyclocryotherapy (a procedure used to reduce the production of intraocular fluid ) in severe cases, a surgical procedure may be necessary to address the cause of the secondary glaucoma or to make your dog more comfortable.

Some cloudy eyes in dogs appear to have actual clouds on the lens, while others may appear to have something on the surface of your dog’s eye clouding it. severe cases of dry eye can lead to ulceration and scarring of the cornea, which fall into the second category.

Dry eye, or keratoconjunctivitis sicca, occurs when your dog’s body doesn’t produce enough tears. Tears are necessary for the lubrication and general health of the eyes, as the aqueous solution is how your dog’s eyes receive necessary nutrients. When your dog doesn’t produce enough tears, the surface of his eyes becomes irritated. ulcers can form and, in severe cases, lead to perforation of the eye itself. In chronic cases of dry eye, the surface can scar, creating a dull, cloudy appearance.

Most cases of dry eye are the result of an abnormal reaction of the body’s immune system. some breeds are more susceptible to dry eye than others, such as yorkshire terriers and pugs.

There are other symptoms of dry eye besides cloudy eyes. these include mucous discharge, redness around the white part of the eye, swelling of the tissue on the surface of the eye and the eyelids, and squinting or excessive blinking. Dry eye is often associated with autoimmune inflammation of the lacrimal glands and can be a lifelong chronic condition. Diagnosis includes an eye exam and sometimes a test to measure tear production and moisture in the eye.

Fortunately, dry eye can usually be treated with tear-stimulating medications and topical antibiotics, and in severe cases, surgical options are available to help promote increased tear production. “If diagnosed early, treated consistently, and checked regularly by a veterinarian, dogs with dry eye can be pain free,” reports Dr. klein.

ulcers that form as a result of dry eye, trauma from rubbing the eye against a rough surface or being scratched by another animal, bacterial or viral infections, or other eye problems, such as entropion (inward-turning eyelids) or distichia collocated hairs) can also create a cloudy appearance to your dog’s eye.

Ulcers are sores on your dog’s cornea (the membrane at the front of the eye). as they progress, they can appear bluish, reddish, or simply as a haze on the surface of your dog’s eye. Like other serious eye problems, corneal ulcers can be painful and are often accompanied by discharge and squinting. if they become infected, they can cause serious damage and even perforation.

To diagnose a corneal ulcer, the veterinarian will use a fluorescein stain test and sometimes samples will be taken for culture. ulcers are usually treated with medicated drops to prevent infection and relieve pain, and in severe cases may require surgery to save your dog’s eye, so it’s best to take your dog to the vet as soon as you notice signs of eye discomfort , such as squinting or rubbing your eye with a paw.

Anterior uveitis can also cause a cloudy appearance to your dog’s eyes. The uvea refers to the part of the eye that is made up of the choroid, the ciliary body, and the iris, the tissue at the front of the eye. Anterior uveitis is inflammation of one or all of these structures, and is a serious condition that can lead to irreversible vision loss.

Symptoms of anterior uveitis include redness, discharge, squinting, an oddly shaped pupil, swelling of the eyeball, excessive tearing, and a cloudy or dull appearance.

This painful condition can have a variety of causes, including autoimmune diseases, cancer, trauma, metabolic diseases, parasites, and fungal, viral, and bacterial infections. Your vet can run a number of diagnostic tests to narrow down the culprit. Treatment will depend on the cause and may include eye drops, eye ointments, and oral medications. 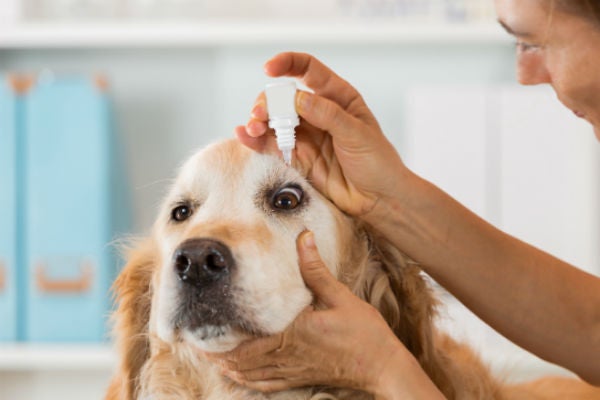 Some dogs develop a condition called corneal dystrophy, which gives the cornea a cloudy, opaque appearance. This common condition is inherited and divided into three types based on location in the eye: epithelial, stromal, and endothelial.

epithelial corneal dystrophy affects the superficial layers of the cornea. this condition can be uncomfortable, and shetland sheepdogs seem to be the most susceptible breed.

endothelial corneal dystrophy affects the deeper corneal layer. Dogs with this condition are usually middle-aged or older, and Boston Terriers. Chihuahuas and dachshunds are genetically predisposed. this type of dystrophy can cause corneal ulcers.

The vet will use a microscope with a bright light to identify the type of corneal dystrophy your dog has, as well as a fluorescein stain to examine the details of the eye, and may prescribe antibiotics for the eyes. the appearance of cloudy eyes may continue. Both epithelial and endothelial corneal dystrophy can cause ulcers that require treatment, but there is no cure for corneal dystrophy. this condition does not usually lead to compromised vision.

diagnosis and treatment of cloudy eyes in dogs

A veterinarian is the best person to diagnose the cause of your dog’s cloudy eyes, and your general practitioner may refer you to a specialist in veterinary ophthalmology for further treatment.

Watch your dog closely for other symptoms of eye problems, such as increased discharge, squinting, or a change in the shape, size, color, or vision of your dog’s eyes, and contact See your vet as soon as possible if you notice redness, squinting, or thick discharge from your dog’s eye, in addition to cloudiness.

Read more: Why do dogs lick the air when you pet them